By kulshanvh August 2, 2017 Uncategorized
No Comments 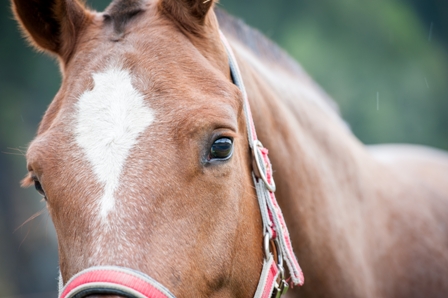 by David Sauter, DVM
Horses have more than their fair share of eye problems when compared to other domestic animals. Before reviewing some of the more common problems, here are some fun facts regarding equine eyes:
• Horses have the largest globe of all land mammals.
• Horse’s eyes magnify images 50% larger than the human eye does.
• The far lateral position of the eye on the outside of the skull, the rather bug-eyed conformation and the horizontal orientation of the pupil give the horse a wide monocular (two-dimensional) field of vision (each eye can see 195º from side to side and 175º from top to bottom).
• Binocular vision (i.e. three-dimensional) is the area of overlap in the field of vision of both eyes and, for the horse, it is 65º and their field of vision.
• Total horizontal field of vision is 350º.
• Horses have a blind spot directly in front of their muzzle and another several feet behind their rump
• Horses blink 5 to 25 times every minute.
• Horses have some color vision – they see yellows, blues and greens but do not see red shades well.

Swollen eyelids
A common cause of swollen eyelids is trauma in the form of blunt injury to the head, such as collision with solid objects or a kick. As long as the eye itself is undamaged and only the eyelids are affected, treatment is fairly straightforward. Non-steroidal anti-inflammatory drugs are very helpful. Banamine is better for ocular inflammation than Bute or Equioxx.. Application of an ice pack reduces pain & swelling and, if the horse tolerates the initial shock of cold, they might like it. Generally treatment results in rapid improvement, unless there is more injury than simply a swollen eyelid. More severe trauma can result in serious damage involving the globe itself. For example, fracture of the bones of the orbit, hemorrhage into the anterior chamber, uveitis, dislocation of the lens, and retinal detachment.

Eyelid lacerations
Unfortunately eyelid lacerations in horses are not uncommon. Normal scratching behavior often can be the cause. Horses eyes get itchy and they love to scratch. Sharp objects do a wonderful job of scratching, until one unfortunately hooks into the skin, causing the horse to jerk its head back and tear the edge of the eyelid, leaving it hanging below the eye from its remaining attachment. When repairing such injuries, it is important to preserve the normal anatomical margin of the eyelid to ensure its proper function of cleaning the surface of the eye and keeping it moist. Consequently, eyelid lacerations need prompt veterinary attention. Swelling develops quickly and will interfere with repair.

Nasolacrimal duct obstruction
Horses have long tear ducts that funnel old tear film out of the eye for drainage down into the nostril. Obstruction of this duct results in an overflow of tears, which end up streaming down the face. The skin below the eye gets irritated and attracts dirt and debris from the chronic wetness. Most commonly, obstruction is caused by debris and mucus. The duct can be flushed out while the horse is lightly sedated. In some cases, the blockage is permanent, such as the result of damage to the skull, tumors, or scar tissue within the duct.

Corneal abrasions
Horses are by nature active and athletic. As previously mentioned, they also have a large, prominent eye. Consequently it is not so surprising that they commonly suffer injury to the eye, including abrasion to the cornea. Corneal scratches are extremely painful, unlike simple eyelid swelling. Tears often run down the face, because the pain causes overproduction of tears. Like wounds in other areas, damaged cornea develops edema. Corneal edema causes the normal translucent cornea to become cloudy. The damaged cornea causes inflammation deeper into the eye, called uveitis. This results in a tightly closed, constricted pupil. Treatment consists of topical ophthalmic antibiotics to help defend against bacterial infection. Non-steroidal anti-inflammatory drugs such as Bute or Banamine are important to help ease the pain. Atropine is used to open the pupil and relax the muscles in the iris.

Equine Recurrent Uveitis (ERU)
This disease is more commonly known as Moon Blindness. There are other medical names also, such as Periodic Ophthalmia. It is one of the most common causes of blindness in horses. The overall incidence in the United States has been estimated at 8%. The disease is due to malfunctioning of the immune system and there are several types and stages to the disease. The classic form has recurrent bouts of severe uveitis with cloudiness in the cornea, cloudiness in the anterior chamber, severe pain, sensitivity to bright light, and a severely constricted pupil. Commonly there are quiet periods when the inflammation subsides but these periods are followed by increasingly severe episodes. Cloudy areas on the cornea become permanent, scar tissue develops inside the eye between the iris and lens, the corpora nigrans shrinks, and the iris can change color. The entire globe of the eye shrinks in size and cataracts often develop. Some develop glaucoma as a secondary problem.

There is a more insidious form of Moon Blindness, which is more common in Appaloosa and draft breeds. The inflammation is much more mild, chronic, with much less discomfort. It does however progress steadily and eventually also leads to blindness.

Treatment centers on two main goals – reducing inflammation, generally with corticosteroids, and reducing pain, primarily by getting the pupil to dilate with Atropine and using analgesic medications such as Banamine. Surgical procedures are showing promise at preventing the recurrence of uveitis. The recurring nature of the disease often leads to blindness and surgical removal of the eye.

Eyes are VERY important and delicate. Prompt and appropriate treatment is very important. Get advice from your veterinarian before beginning any treatment on your own.