What is campylobacteriosis infection? 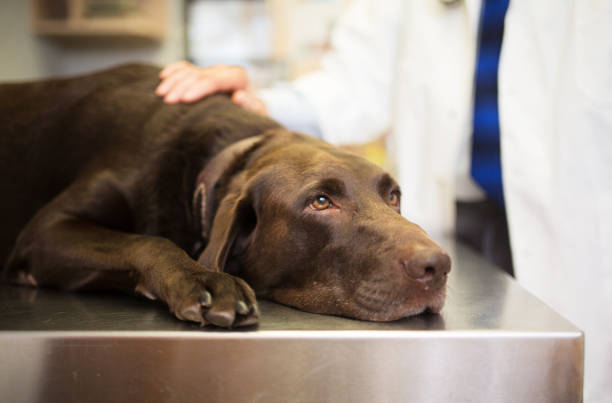 Poultry and meat products are the main sources of human campylobacter infection. Humans usually acquire an infection by consuming contaminated raw milk, undercooked chicken or poultry, or other food that has been contaminated during preparation. Dogs tend to become infected with Campylobacter by ingesting or coming into contact with infected feces or infected food, such as raw meat or contaminated water.

Can my dog get campylobacteriosis?

Research has shown that Campylobacter can be isolated from both healthy and sick dogs. This suggests that the organism is not a primary cause of illness in the dog. Since campylobacteriosis does occur in the dog and has a zoonotic potential (ability to cause disease in man) it should be considered a possible source of infection for humans. If you are concerned about campylobacteriosis, please consult your veterinarian or your medical doctor.

"...the significance of dogs as a source for human infection is not clear..."

Although the most common source of infection in humans is contaminated poultry and meat products, pet ownership increases the risk of campylobacteriosis.

What are the clinical signs of Campylobacter infection?

In the dog, typical symptoms include watery to mucoid diarrhea, straining, abdominal cramping or pain, lethargy, and fever. The diarrhea may last a week or more and often relapses suddenly after the dog appears to have recovered. Many dogs appear unaffected by campylobacteriosis and the condition is often self-limiting, requiring no medical intervention.

How is campylobacteriosis diagnosed?

Campylobacter infection is usually diagnosed by laboratory examination of a fecal sample. Although microscopic examination and DNA (PCR) testing of feces can demonstrate the presence of Campylobacter, a fecal culture and sensitivity test is normally required to make a definitive diagnosis, because healthy dogs can carry the bacteria without being sick. This test is often performed in chronic, persistent, or severe cases of diarrhea that have not responded to conventional treatments.

How is campylobacteriosis treated?

The two most common bacteria that cause campylobacteriosis, Campylobacter jejuni and Campylobacter upsaliensis, are resistant to many antibiotics. Erythromycin or tylosin are the treatments of choice in dogs. Other medications may be used based on your dog’s condition. Your veterinarian will prescribe the appropriate antibiotic treatment for your dog, based on fecal culture and sensitivity results.

"Antibiotics...reduce the number of bacteria excreted in the stool, thereby reducing the risk of infection to other pets or members of the household."

Although antibiotics may not shorten the duration of illness, they will reduce the number of bacteria excreted in the stool, thereby reducing the risk of infection to other pets or members of the household.

What can I do to prevent the spread of Campylobacter if my dog has been diagnosed?

The best prevention is good hygienic practices, such as removing feces from your yard on a regular basis, cleaning any soiled areas in your house, and laundering your dog's bedding frequently. It is essential to ensure thorough hand washing after handling an infected dog. Discourage an infected dog from licking people's faces, particularly those of young children.

© Copyright 2021 LifeLearn Inc. Used and/or modified with permission under license.