By kulshanvh June 1, 2017 Uncategorized
No Comments 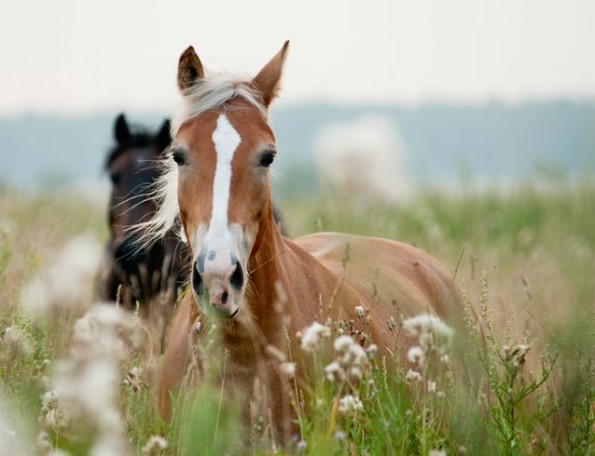 Horses have a unique predisposition to gastric ulcers, one that has developed as a result of their evolutionary history and the feeding and management changes that people have imposed on domesticated equids.
Early horses, roaming and browsing for millennia on the ancient plains of what would become North America, had one major preoccupation: acquiring food. As the species changed and grew to become the modern horse, the digestive tract and habits changed very little. In the wild, modern horses can spend as much as 18 hours per day grazing. As a result, horses secrete gastric acids continuously throughout the day, rather than in response to food intake (such as in people, dogs, and other similar monogastric species). This means that if there is no food in the stomach, the gastric lining is completely exposed to powerful digestive juices. Modern horse management, consisting of only feeding a horse 2-3 meals a day separated by several hours without food, means that the stomach is empty for long periods. High-starch, low-fiber feeds, such as grain, are also more easily digested and broken down, absorbing less acidity from gastric secretions than hay.
The anatomy of the stomach is also a factor. The horse’s stomach lining has two components. The lower half, which secretes the gastric juices, is relatively resistant to acidity and is tough and durable. The upper half, however, is far more sensitive. The two halves are demarcated by a distinct line, called the margo plicatus. When a horse performs high-intensity exercise, such as entering race training, the stomach acid can splash from the lower half to the upper, more easily damaged half. Most of the gastric ulcers we see occur on the margin between the two different linings.
So, how do you know if your horse has gastric ulcers? Typical symptoms of EGUS include grinding the teeth, avoiding grain but maintaining a good appetite for grass and hay, and mild frequent colic. Horses with gastric ulcers also do not perform as well as if they did not have the ulcers. Definitive diagnosis is via gastric endoscopy, where a small fiber optic camera is passed down the horse’s nose into the stomach to see the stomach lining.
There are several drugs that can help treat gastric ulcers. The most effective and least labor-intensive treatment is once-daily Omeprazole at a rate of 4.4mg/kg for 4 weeks (don’t worry, the tubes have a poundage dose, like a dewormer!). Although available from multiple compounding pharmacies and side formulations, the specific equine-formulated paste (Gastroguard) is the gold standard, as some compounded medications may not have enough active drug to get clinical efficacy. More labor intensive options include thrice-daily ranitidine (also known as Zantac) and sucralfate (Carafate), but these drugs need to be given strictly 8 hours apart for appropriate efficacy. This can be a lot to handle when you’re treating your horse for several weeks at a time!
As with any syndrome, prevention is better than cure. Management tools to prevent gastric ulcers include having hay or other forage available at all times (free choice hay), reducing grain ration, slow transitions between exercise regimes, and reduction in stressful situations such as housing and pasture resident changes. Omeprazole given at 1/4th of the treatment dose has also been shown to prevent ulcers in horses in stressful situations.